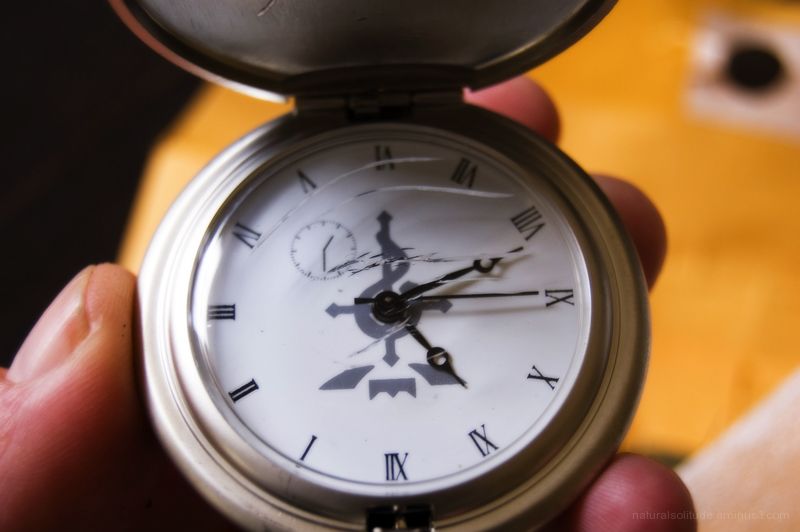 This is a replica of Edward Elric's pocket watch from Fullmetal Alchemist, which is Hayley's favorite anime and manga series. I bought it for her birthday, and the first one we received didn't work - and broke when we tried setting the time (the little pin holding the crown for setting the time broke off). We sent it back, and received this one - which is obviously cracked, even though it had a piece of plastic film over it and was packaged very well. The seller offered to replace it again, but I decided it wasn't worth paying more in shipping than what the watch itself cost in the first place. That, and she needs the watch next week for a cosplay event (assuming her grades are fine and she's not grounded - surprisingly, the poor grade isn't in math this time).

And, yes, it's upside down. I had to hold it that way so the light hit the cracks and I could get a photo to send to the seller (which I ended up not needing to do).

It has been a while since I've submitted anything to the photo challenges. So, this one is for Thursday Challenge: Time.

The picture is beautiful. I don't see anything wrong.

Shame about the cracks, but a good shot. Hope the grades are good!

Nice shot. Too bad it is broken. What a rip off!

@Sarala: It really isn't that big of a deal, S. And the guy who sold it even offered to replace it again.