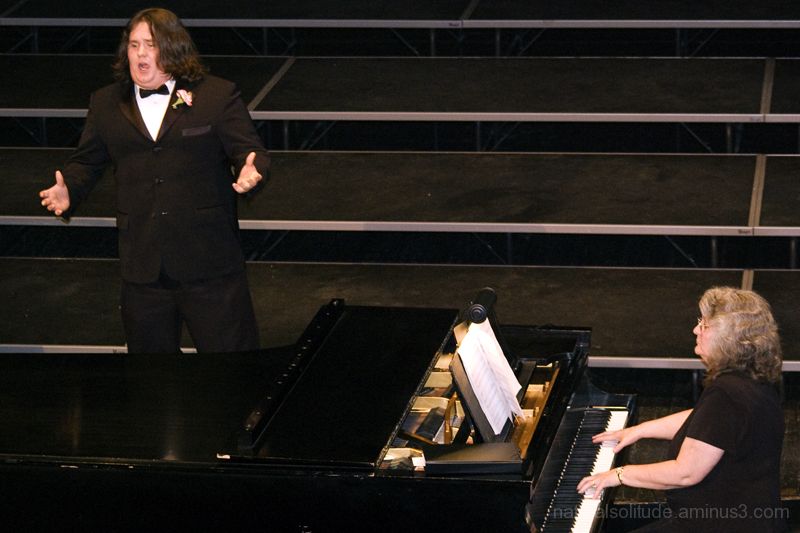 Posted by Kathe (Marquette, Michigan, United States) on 13 May 2009 in Lifestyle & Culture.

My buddy, Jake, had a solo last night during the high school's choral concert. He sang Che gelida manina from "La Boheme" by Puccini, accompanied by his grandmother, Lynn, on piano and the MSHS Chamber Orchestra. He has decided to focus on operatic works, but is still singing rock music with his buddies. His voice is amazing! Several people have commented that he could very well be the next Luciano Pavarotti. It certainly wouldn't surprise me!

He comes from a very talented musical family. Jacob's mother, Christy, and I were in Treble Impressions, an all-female choir, together in high school - the same choir Hayley has been in since last year, except the name was changed to Choral Impressions...and they apparently have had boys singing in the choir.

Hayley, unfortunately, did not have a solo. But that didn't stop her from singing her heart out with the rest of her classmates. This performance was rather special, as it was the last for the graduating seniors - and we know many of them, including one of Hayley's closest friends, Alaina.

Jake has been so incredibly busy this year that it's been a long time since I've heard him, Alex, and their buddies singing from their rooftop. (As some of you may recall, Jake and his family are also our neighbors.) Although I wasn't too thrilled about it at 3:00am, I still miss hearing them.

What a lovely story. I love classical music and I'm sure I would've enjoyed this concert immensely. I wish your friend the best in this career, hopefully he'll go far.

Hope someone gets him a larger jacket. :) Very expressive moment you caught here.

@Mindy | f-stopMarin: I think he just got a new tux. In fact, I think it may be this one...but I'm not certain. And, yes, Jake is quite expressive - as is my nutty daughter. ;^)