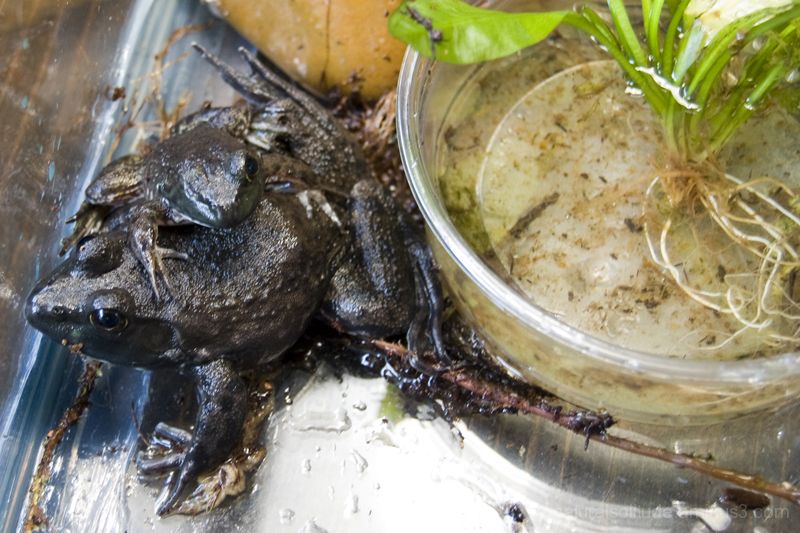 Posted by Kathe (Marquette, Michigan, United States) on 21 May 2009 in Animal & Insect.

I was finally able to fire off a couple of very quick shots of Michi and Ren. I had them in this temporary enclosure while I was cleaning their bigger one and doing some rearranging inside it.
It's amazing how huge Michi is now, especially compared to little one-eyed Ren. I'm still not sure what kind of frogs they are. I'll probably never try raising tadpoles again, unless I know what kind of frogs they'll be!

Here, Ren seems to be wanting a piggyback ride from Michi. (Shouldn't they be playing leapfrog???) But when it was Michi's turn, he nearly squished the life out of poor little Ren! I had to chase him off of her. (No, we still don't know for sure of their sexes, but from what I've read, we may have actually guessed correctly!) It's so nice seeing Michi tolerate Ren's presence now. Ever since her buddy, Yasu, died, Ren has been kind of lost.

And the fun we have now is listening to Michi learn how to make froggy sounds. He doesn't do it very often - once or twice each night - so it takes a little while for it to register in my brain when he does do it. I wish I could describe it...it's definitely not a full adult call yet.

Can I be president of Ren's fan club? Please. Please. Pick me. I love Ren.

Hayley: "I should be president!" (Translation: "Nay")

What's the first order of business? Getting rid of Hayley?

I'll join the club. Can't believe you have a frog with one eye. Amazing . . .

@jane: What's amazing is that she's alive. When she was still a tadpole, she became quite sickly - after losing her eye especially. But she's a little fighter, which is why Beth is such a big fan of Ren's. ;^)

Okay. We revoted - Hayley and Beth are Co-Chairpersons. So you can be...ummm...the Secretary? If Mindy also wants to join, she can be the Officer of Creativity or something. Obviously, I will have to be the Treasurer, since I'm the one paying for their upkeep. ;^)

Yup, officer of creativity. You rock, Kathe. Let Jane and Beth deal with the boring stuff. I'll just be creative. With inspiration such as Ren, that'll be fun.

Ok, first order of business: the president...errr...co-chairpersons need a raise.
Second order of business: who is going to volunteer to teach Ren braille? We don't want him falling behind in frog school. He needs to read The Frog Prince asap.
Third order of business: I hear Mindy may be dabbling in video soon. Ren needs to be on YouTube to expand his base. Time for some creativity.

@beth: Nope.
First order of business is apparently for you to spend more time with Ren. SHE is not totally blind - she still has one eye!
As for video, that may be a bit of a challenge, since the frogs are nocturnal and are very rarely seen...EVEN at night.

I vote "yay" to double your current salary. All in favor...?

shhhhhhhhhhhh. just go with it, will ya. I've already got Ren booked on oprah...the blind part was key. we're gonna say the left eye is glass. ok? got it? trust me.

@beth: I dunno...I think Ren would prefer to stay honest and true, setting a good example for other one-eyed froggies.

What a great shot and a fascinating story!!!

@Sarah: Thanks, Sarah. You should hear what they sound like - almost like a cat trying to bark. *LOL*