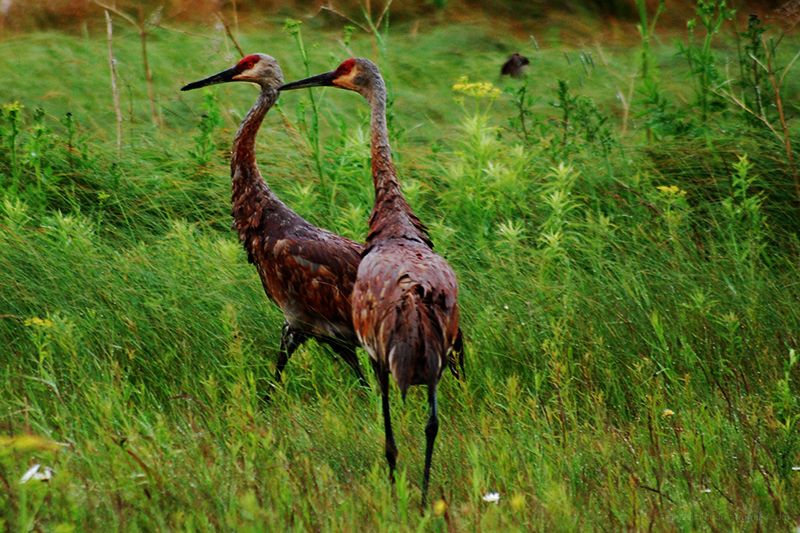 My sister arrived yesterday (from Florida) to stay and help me after my surgery this next Wednesday. We drove to Eastern Upper Peninsula to visit my mother's grave, hunt for agates, take a look at my grandma's old house, and ESPECIALLY (for me, anyway) to capture some shots of sandhill cranes.

These cranes have a special place in the lives of my family members. They were probably my mom's favorite birds, and two wandered out of the swamp next to my parents' house the day before my mother passed away (which, by the way, were never seen in that area before that day). They stopped only about 3 feet from her before turning around and strolling back into the swamp. My parents property had a creek that also ran behind the house that I was living in after her death, and my dad and I would see the same pair of cranes flying between the two houses (about 1-1/2 to 2 miles apart along the creek). My dad eventually had a family friend - a Native American artist - do an oil painting of sandhill cranes. It was beautiful!

Anyway, the area near the cemetery where my mom is buried is known to contain a population of sandhill cranes. Unfortunately, this was the first time (in almost 40 years!) that we did not see a single crane there. Thankfully, there is also a stretch of road between Marquette and Paradise, known as the Seney Stretch, where they sometimes appear as well. And they definitely showed up in that area! On the way there and back, we saw at least 5 or 6 pairs (maybe more) of sandhill cranes. I only got to photograph two or three of those pairs. This particular shot was taken around 8:30 this morning.

@Beth: Thanks, Beth. Nice to hear from you! Hope all is well in Bizzleland!

Nice image of the cranes set in that lush green grass. Yours are browner than ours on the West coast, but still a wondrous bird. They are funny, how they aren't where you want them, but just down the road. . .

@Jane: They are definitely wonderous birds - I agree!