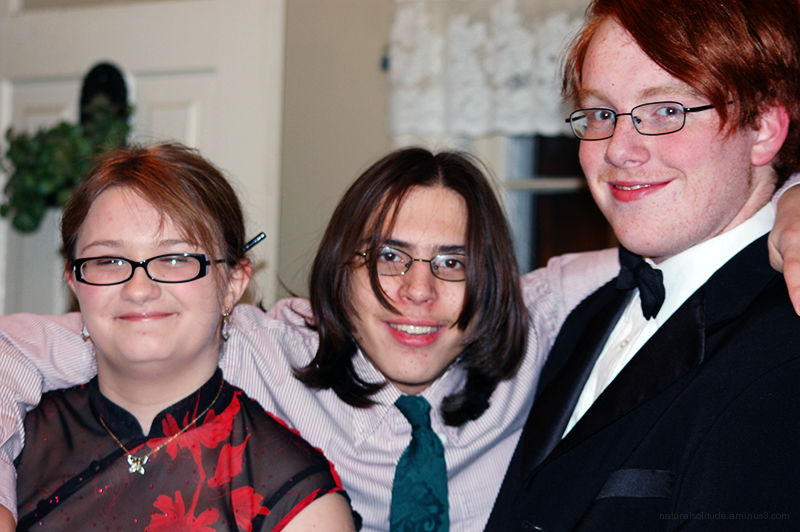 Not a great shot, I know. (Have I mentioned how much I hate indoor photography?) But I couldn't let the evening pass without the obligatory smile-for-the-camera shot. Isn't it required of ALL proud parents? ;^)

Hayley, Damion and Joe - all dressed up for their Christmas choral concert tonight. Hayley had quite an eventful evening prior to this. While I went to the grocery store with a neighbor, Hayley tossed her dress into the dryer (which is in the basement...and we have to go outside to get to the basement), and hopped into the shower. After the shower, she threw on some pj's to run back and get her dress from the dryer. She went out our new back door, not realizing it remained locked after you closed it. Yup...she locked herself out, with barely above (or even AT) freezing temperatures...and no jacket.

She was smart enough to run over to the previously-mentioned neighbor's house to use the phone. But I didn't hear my cell phone ring while I was inside the store. So, silly girl...she went and stood outside to wait for me! She eventually had enough sense to try calling me again, and we got her inside to get ready for her concert. But then the zipper broke on the dress she planned on wearing, and the nylons had a hole. Thankfully, she had another dress she could wear (but wanted the other one...and she went without the nylons). Poor kid was beside herself trying to rush.

The good news is she made it just in time. Bad news is, I didn't have the money to attend. Sooo...this is the only shot I'll be getting that has anything to do with her Christmas concert. :^(

The kids look great. Too bad you couldn't go.