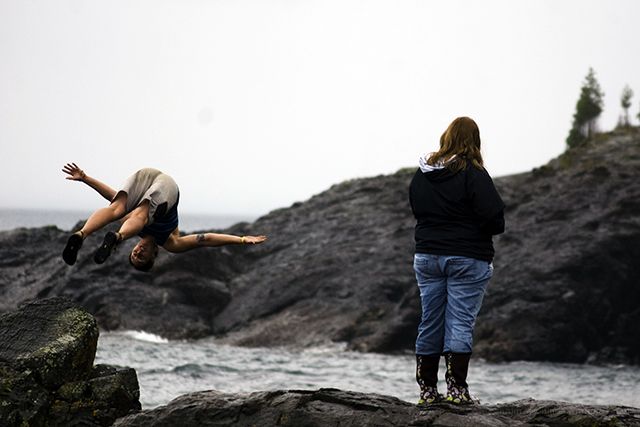 While out on an outing with some of the members of our newly-formed photography club (Superiorland Photography Club) to Presque Isle, we encountered a group of girls jumping/diving/flipping from the top of the rocks into the water below. Some of them were obviously not from this area, and found the water to be cold. Little did they know, this is the warmest time of the year for Lake Superior. From the way they're bundled up, you'd think it was cold out today...but it actually wasn't bad at all - just a bit rainy/drizzly.
(ACK! I only posted ONE photo last month?! That'll hopefully change now that I can maybe get out more with other photographers. There's only so much you can photograph within walking distance of your home and not get sick of seeing - and photographing - the same stuff over and over...)

This is a great capture. Bottoms up...

@Jane: Thanks, Jane.
By the way, I haven't been able to comment on your photos in quite a while. Keep getting error messages when I try to post a comment. :^(